You are here: Home / About / Updates to the Scheme / National Redress Scheme – Update

Thank you for visiting this website. In the period preceding an election, the Australian Government assumes a caretaker role.

The Department of Social Services hosts this website and the department will manage it in accordance with the Guidance on Caretaker Conventions.

This newsletter covers an update on the National Redress Scheme (the Scheme).  It provides information for Aboriginal and Torres Strait Islander Peoples, details on our progress with implementing recommendations around the Second Anniversary Review, details on the National Apology for Victims and Survivors of Institutional Child Sexual Abuse, and information about new institutions that have joined the Scheme.

The update contains material that could be confronting or distressing. Sometimes words or images can cause sadness or distress or trigger traumatic memories, particularly for people who have experienced past abuse or childhood trauma.

Support is available to help you at at www.nationalredress.gov.au/support. If you need immediate support, 24-hour telephone assistance is available through:

The Scheme has implemented a range of resources for Aboriginal and Torres Strait Islander Peoples living in northern Australia. These activities focus on building trust in the Scheme among survivors and raising awareness of the Redress Support Services.

More information and view our resources 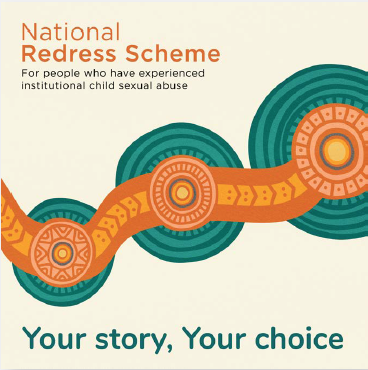 The National Redress Scheme has produced a range of AUSLAN videos. These include:

The Government has legislated the implementation of the following measures in response to the Second Year Anniversary Review recommendations through the National Redress Scheme for Institutional Child Sexual Abuse Amendment Act 2021 (the Act), which commenced on 17 September 2021:

The National Redress Scheme for Institutional Child Sexual Abuse Amendment (Funders of Last Resort and Other Measures) Bill 2021 (the Bill) was introduced in Parliament on 27 October 2021.

The Bill follows recent legislative amendments that established a range of measures to improve the Scheme. This Bill is a further step in responding to recommendations from the Review of the National Redress Scheme.

The Bill seeks to expand FOLR arrangements to capture defunct non-government institutions (NGIs) with no responsible parent institution and where a government is not equally responsible for the abuse.  It also captures NGIs that do not have the financial capacity to participate in the Scheme.  Under the provisions, where an institution is found to be financially unable to join, they could still partly participate in the Scheme by responding to Requests for Information and providing Direct Personal Responses.

As with current FOLR arrangements, the relevant government(s) will need to agree to list an institution for FOLR before the arrangements apply.  States and territories will consider institutions on a case by case basis. The FOLR expansion will not cover institutions who choose not to join the Scheme.

The Bill contains specific provisions under which protected information can be disclosed by the Scheme Operator to publicly name non-participating NGIs.  The legislative amendment aligns with the existing practice for naming NGIs on the Scheme’s website, which is an important lever in encouraging participation in the Scheme and also help keeps survivors informed.  NGIs will continue to be supported and given sufficient time to join the Scheme before they are publicly named.

Please note, these measures will not commence until they have been passed and enacted by Parliament.

22 October 2021 marked the third anniversary of the National Apology for Victims and Survivors of Institutional Child Sexual Abuse, commemorating the childhoods that were stolen and renewing the Government’s commitment and responsibility to protecting Australia’s children.

In honour, the Prime Minister announced that the Blue Knot Foundation, along with its key consortium partners, the Australian Childhood Foundation, and the Healing Foundation, would establish and deliver the National Centre for the Prevention of Child Sexual Abuse.

The Blue Knot Foundation will draw on the expertise of businesses, the sector, and the invaluable knowledge of victims and survivors to inform improved primary prevention, secondary support and tertiary intervention.

In response to a recommendation from the Royal Commission into Institutional Responses to Child Sexual Abuse, $22.5 million was committed to the establishment and operation costs of the National Centre over five years.

The National Centre is expected to be established by the end of 2021.

For more information, please visit the website for the Department of Social Services.

The Scheme is continuously working with institutions that have been named in applications or identified by other means to encourage them to join and participate in the Scheme. As at 29 October 2021, the Commonwealth, all state and territory governments and 538 non-government institutions covering around 69,200 sites such as churches, schools, homes, charities and community groups across Australia are participating.

A number of institutions were recently added to the Scheme legislation. This declaration is available via the Federal Register of Legislation: https://www.legislation.gov.au/Details/F2020N00101

For the latest information about institutions, visit our website: https://www.nationalredress.gov.au/institutions

Application progress as at 12 November 2021 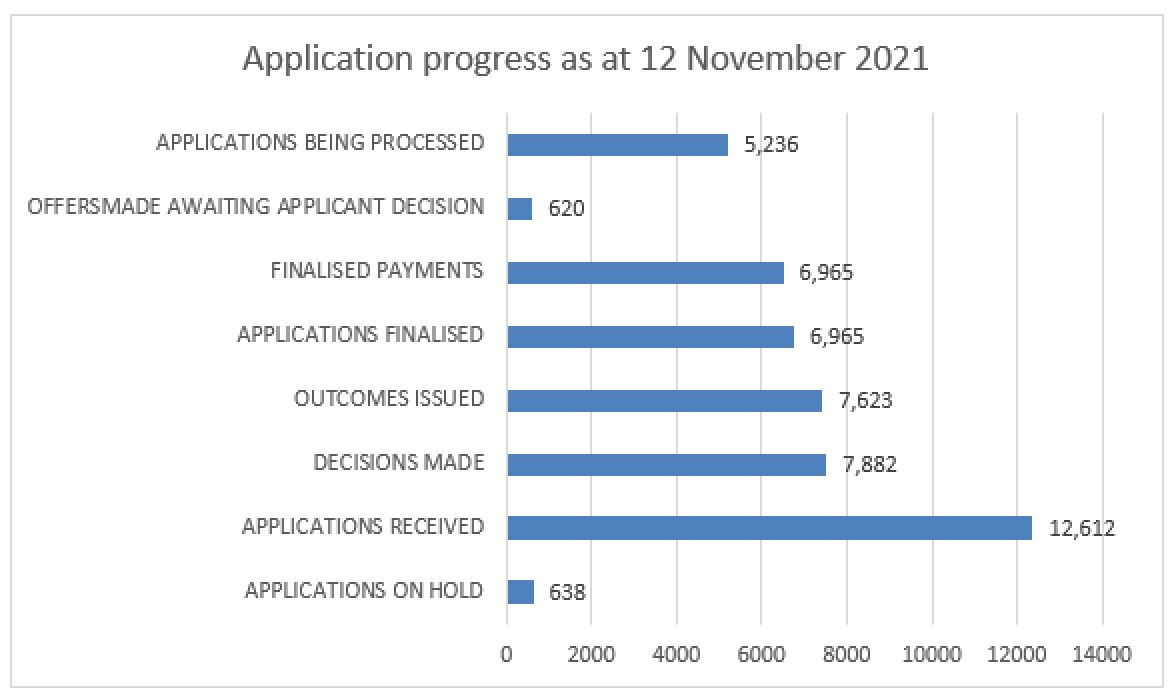